The parish church of Llanidloes is dedicated to St Idloes, a seventh century saint about whom very little is known. His feast is celebrated on September 6th and this church is the only one in his dedication. Three manuscripts testify he was the son of Gwyddnabi ab Llawfrodedd who was a red-bearded knight. 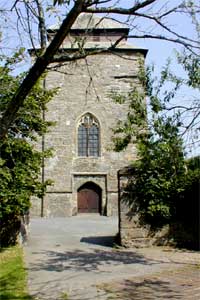 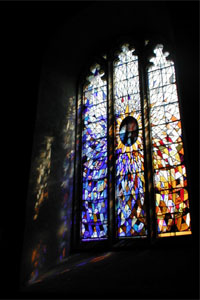 The oldest part of the present building is the tower, probably built in the fourteenth century. Considerable repairs were carried out during the reign of Queen Anne and 100 years later the south and east walls were taken down and rebuilt. The roof arches were acquired from the Abbey at Cwmhir after it was dissolved in 1536.

The most recent addition is the Millenium Window donated by Mr and Mrs Gerald Hamer in memory of their parents. The centrepiece represents the chaos that existed before creation and the surround dipicts flora and fauna including the donors' St Bernard Dog. 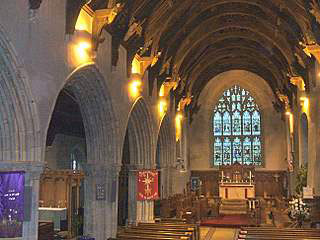